Known as the “Birthplace of the U.S. Navy,” Whitehall, originally called Skenesborough, is a settlement that boasts many layers of military, canal, and railroad history.  Our outing will begin at the Skenesborough Museum, located in a 1917 canal terminal building. 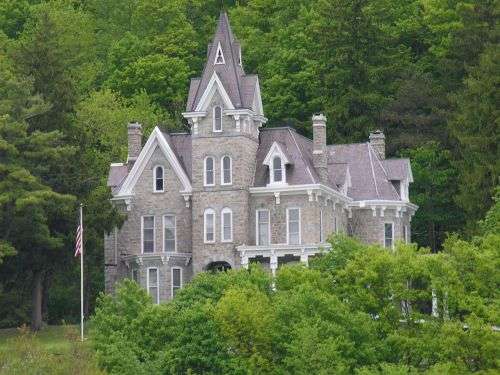 After an introduction to the town’s history and the museum collections, participants will be invited to browse exhibits before we carpool to Skene Manor for a tour and specially prepared lunch in the Tea Room.  The Manor, perched on Skene Mountain, is a Gothic Revival mansion built by New York State Supreme Court Judge, Joseph H. Potter, during 1874-1875.  The mansion is built of gray sandstone quarried from Skene Mountain by Italian stone cutters.

After lunch, we will return to the museum to begin our guided walk through Whitehall with Skenesborough Museum Director, Carol Greenough.  Portions of the downtown are on the National Register.