The bucolic Town of Schuyler Falls, a quiet and historic section of Clinton County, became its own municipality when it separated from the Town of Plattsburgh in April 1848. Its two scenic rivers—the Saranac and Salmon—provided power, while its bountiful woodlands and fertile farmland spurred both the lumber industry and agricultural pursuits. Simultaneously, other natural resources like iron ore and various stones and minerals were mined and processed here. By the mid-19th century, Schuyler Falls and its hamlets were flourishing and continued to prosper through the mid-20th century. Sadly, devastating freshets, fires, and time have eroded many signs of the town’s once prosperous industries. However, a rich historic building stock and scenic landscapes remain to help tell the story of Schuyler Falls. 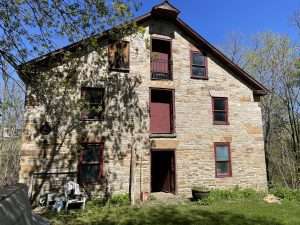 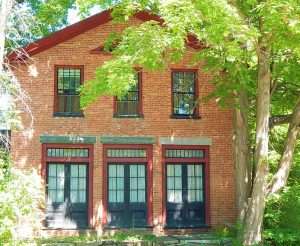 Buildings throughout the town—residences, barns, outbuildings, churches, stores, and a historic mill—exhibit the area’s strong connections with farming and its historic industrial period and post-boom, including several buildings constructed of local sandstone and brick. On this brand-new tour off-the-beaten-track, we’ll explore the hamlets of Schuyler Falls, Morrisonville, and Woods Mills, to witness and learn about this special community through a variety of intact 19th-century buildings, infrastructure, and scenic sites.

This tour is led by Town of Schuyler Falls Historian Barb Benkwitt and AARCH Preservation Services Director Christine Bush. The tour begins at 10 AM and ends around 3:30 PM.