Not currently being offered
Multi-Day Tour! 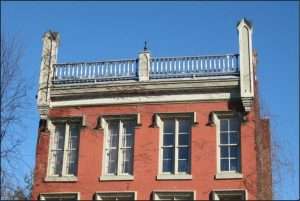 Sackets Harbor, a picturesque village on the coast of Lake Ontario, was a naval center for the American military during the War of 1812. A battle here in 1813 for control over the shipyard was narrowly won by the Americans. The town is known for its National Register-listed historic district, with its collection of nineteenth-century buildings.

We will start our trip on Wednesday, June 22,with a special guided tour by Constance Barone, site manager of the Battlefield State Historic Site, who will take us through the historic town center, battlefield, and barracks. We’ll stay the night at Ontario Place, a family-owned hotel right on the lake. In the evening, dinner is at the Sackets Harbor Brewing Company, a historic train station turned craft brewery.

Next morning we will head to Watertown, a nearby urban center with a history stretching back over two hundred years. We’ll get an exclusive tour of the Flower Memorial Library, a stunning building from 1904 with incredible architecture and artwork. Then collect bag lunches from the Crystal, an historic restaurant built in 1925 with a remarkably preserved interior, and have a picnic in the John C. Olmsted-designed Thompson Park. 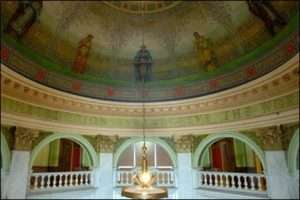 In the afternoon, we will travel to the Thousand Islands in the St. Lawrence Seaway, along New York’s northern border. During the Gilded Age it was known for grand island castles and fast boats, and was the destination for society’s most well-known and influential families of the time.

We’ll begin with a walking tour of Thousand Island Park on Wellesley Island, led by architect Robert Charron. The cottage community here is one of the most intact remnants of the turn-of-the-century summer lifestyle that defined the region. Afterwards we will check into the 1000 Islands Harbor Hotel and have dinner at a waterfront restaurant. After dinner you can explore the picturesque downtown area, a short walk from the hotel, or sit on the patio and watch the sunset. 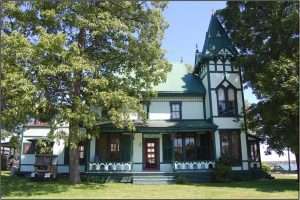 Friday will include a guided tour of the Antique Boat Museum, set on 4.5 acres of riverfront in Clayton; a boat tour of the river; a stop at Singer Castle, constructed of granite for Frederick Bourne, president of the Singer Sewing Machine Company in the early 1900s; and a visit to famed Boldt Castle on Heart Island, built by George Boldt, proprietor of the Waldorf-Astoria Hotel. Construction ceased following the death of George’s wife in 1904 and the unfinished castle sat idle for 73 years before a multi-million-dollar restoration was begun by the Thousand Islands Bridge Authority. Architect Chuck Higgerson will be on board to give us a special look at the castle and its architecture. We’ll return to Alexandria Bay about 4 p.m. and conclude the tour.

The fee for the tour is $600 per person for double occupancy. Single occupancy add an additional $150.

This includes overnight stays at the Ontario Place Hotel in Sackets Harbor and 1000 Islands Harbor Hotel in Clayton, five meals, gratuities, guides and admission to all sites. Participants may reserve an optional extra night at the Harbor Hotel on Friday (not included in tour fee). Please indicate this option in your registration.