One of several free tours AARCH is offering this season, highlighting unique structures and the stories behind them.  The walking portion of the tour will last approximately two hours; please be prepared for periods of walking and standing.  Pre-registration is not required, but is appreciated. Contact Virginia for more information. 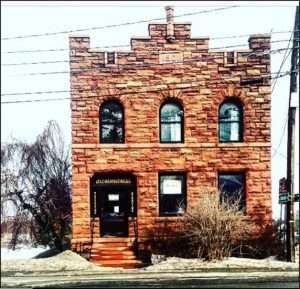 Located just beyond the Blue Line, the Village of Potsdam is a small community architecturally dominated by its vibrant red sandstone structures.  Potsdam was founded in 1803 by Benjamin Raymond, a land surveyor employed by the Clarkson family of New York City; the family owned the majority of land which makes up current day Potsdam.  Soon after its founding, Potsdam became a center for industries including lumber, paper, stone quarries, and became the location for SUNY Potsdam and Clarkson University.  The sandstone quarries that were established along the Raquette River provided the bright red sandstone not only for northern New York, but also for buildings throughout the Northeast, putting Potsdam on the map during the nineteenth century.  This walking tour will focus on residential, educational, commercial, and ecclesiastical buildings constructed of Potsdam Sandstone, dating from the 1820s to the 1930s during the height of the sandstone quarrying industry. 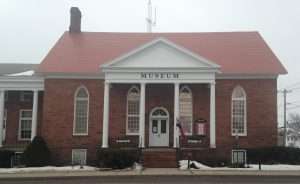 Parking: The museum offers free parking in the municipal parking lot behind the civic center.

The tour ends at Maxfields in the downtown, a short walk from the museum, where food is available.