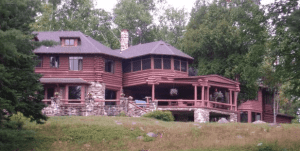 This extraordinary, multi-day Adirondack outing will give us an inside look at several notable private camps in the Blue Mountain and Raquette lakes region.  The home base for our group will be at the historic Eagle Nest property on Eagle Lake, where we will sleep, dine, and relax in the sprawling log camp designed by William Distin and built for Walter and Katherine Hochschild in 1926.

Eagle Nest, originally Eagle’s Nest, began as a 2000-acre parcel owned by William West Durant.  With William Seward Webb, Durant incorporated the Eagle’s Nest Country Club and, by 1900, had built a nine-hole golf course and clubhouse there. But before their more ambitious plans could be fully developed, Durant lost control of his Adirondack holdings and the club property was sold in 1904 to Ernst Ehrmann, Henry Morganthau, Sr., and Berthold Hochschild from New York City. They formed a corporation to manage it and subsequently changed its name to Eagle Nest to differentiate it from Durant’s operation.  Beginning in 1928, Eagle Nest became solely the Hochschild family summer estate.  Today two other large family camps share the Eagle Nest property.  A portion of it is also home to the Blue Mountain Center, a retreat destination for artists and writers. 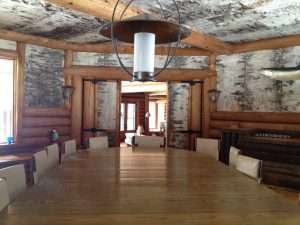 After getting settled at Eagle Nest, our adventure will begin with a luncheon aboard the W.W. Durant, a tour boat owned and operated by Raquette Lake Navigation Company. This educational cruise on Raquette Lake will stop at several sites, including a modern camp with a floating greenhouse.  Following a catered barbeque dinner back at Eagle Nest, AARCH’s Steven Engelhart will give a presentation on the rustic architecture of the region. 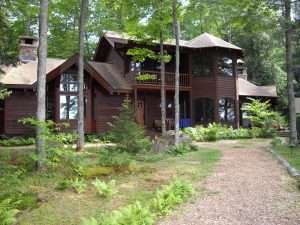 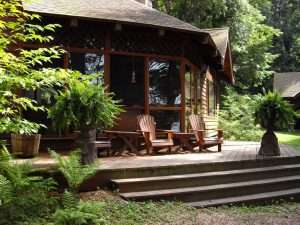 Breakfast the next morning will be a full catered buffet followed by a day of boating on Blue Mountain Lake, stopping for tours at three private residences.  These unique properties represent distinct stories of camp development, from the virtually unaltered 1904 Kla Howya, to the privately-owned Courtney Island, and to the Halsch property where we’ll see the historic steamboat 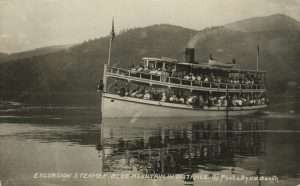 Tuscarora and a replica of a Durant “twin tower” camp.  Our excursion will be led by John Collins, former director of the Adirondack Museum.  We will then return to Eagle Nest for a catered buffet dinner and free time.  Check-out the next day will follow a full buffet breakfast.

This includes two dinners, two breakfasts and two lunches, overnight accommodations for two nights, tax and gratuity. The fee does not include alcoholic beverages.

Please note that most rooms have shared baths, and we will do our best to accommodate specific requests.  This tour requires walking and standing for extended periods of time on sometimes difficult terrain.