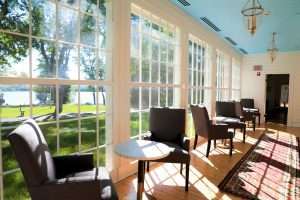 In this exclusive and unique “behind-the-scenes” experience for AARCH Sponsor-level members and up, be some of the first to explore Fort Ticonderoga’s recently restored Pavilion, the 1826 summer home of William Ferris Pell and his family, and a popular hotel between 1840 and 1900. Mingle in and explore the halls of this historic space that welcomed guests like Robert Todd Lincoln, son of president Abraham Lincoln; the prominent French & Indian War historian, Francis Parkman; and even Adirondack photographer, Seneca Ray Stoddard. Today, Fort Ticonderoga has continued the work of William Ferris Pell’s great-grandson, Stephen H.P. and his wife Sarah G.T. Pell, who began the restoration of the fort in 1909 and simultaneously undertook the restoration of the Pavilion as a summer residence. Recently, the superb, multi-year capital-funded restoration work on the Pavilion has concluded.

Join AARCH and other sponsor-level members on this exclusive experience where you’ll be treated to an evening of mingling, drinks and snacks, and a private, behind-the-scenes, curator-led tour of the Pavilion. Additionally, members will take a guided evening stroll in the beautiful King’s Garden and get a rare glimpse of the “Y-D” House, the whimsical play space of the Pell children.

This tour is led by Fort Ticonderoga’s Curator Matthew Keagle and the site’s Vice President of Public History Stuart Lilie. The tour begins at 4:30 PM and ends around 7 PM.  Only ten spots are available for AARCH sponsor-level members and above.

The fee is $55 for AARCH sponsor-level members (and up) only.

Images above courtesy of Fort Ticonderoga.