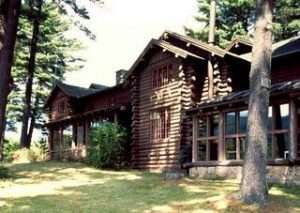 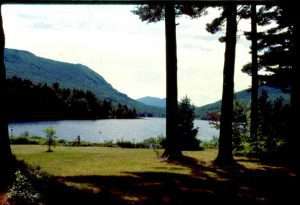 Debar Pond Lodge is located on the end of an 1100-acre pond named after John Debar, a Canadian trapper who discovered it on a hunting trip in 1817.  Robert Schroeder, the son of a German brewer, began acquiring land around the pond in the 1880s, and planted more than 300 acres of hops, making the area one of the largest hop plantations in the world at the time.  After his first residence burned, Schroeder replaced it with an impressive 60-room mansion, which eventually went through several sales after his fortunes were lost.  Arriving at a severely deteriorated condition, the structure was razed, and yet another residence was constructed in 1939 by Mr. and Mrs. Arthur Wheeler.  The new 17-room, cedar log building was designed by William G. Distin, who initially worked under William Coulter, a prolific Saranac Lake architect.  The property includes several structures and was acquired by New York State in 1979.  Through AARCH’s advocacy efforts, the complex has so far been preserved and was recently placed on the National Register of Historic Places.

Our day will include a tour of the property and buildings by AARCH’s Steven Engelhart, a BYO picnic lunch, and guided outdoor activities to enjoy the beautiful lake and mountain surroundings.

SUGGESTED DONATION: $20, and children under age 18 are free.