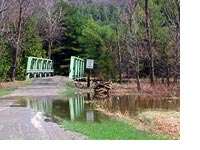 The Otis Road Bridge (Elizabethtown, Essex County), a 1914 Warren pony truss bridge, was remarkably intact and has retained many of its original features. This kind of simple iron bridge, once common across the American landscape, is now an increasingly rare sight.

Despite widespread support for its preservation by residents that use it, Essex County opted in 2013 to replace the bridge. Plans have been made to move the old bridge to the Essex County Fairgrounds in Westport to be used for foot traffic.

To see AARCH’s letter of support for the Otis Road Bridge, follow the link here:
LOS for Otis Bridge 2-15-05 (pdf) 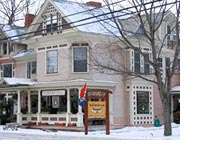 Hubbard Hall, Elizabethtown, the c. 1840 home of Congressman Orlando Kellogg, was extensively remodeled c. 1895 in the Queen Anne style by his son Judge Rowland Case Kellogg. The home later operated as the Elizabethtown Community Hospital under the ownership of Mr. and Mrs. W.H. Hubbard.

Abandoned, by 1994 Hubbard Hall was condemned and scheduled to be demolished. It was placed on AARCH’s “Endangered Properties.” Subsequently, it was purchased by Darren Tracy of West Branch Inc., was placed on the National Register of Historic Places, and through the use of federal tax credits, was rehabilitated. Hubbard Hall was destroyed by fire January 11, 2011.

The Wawbeek (Upper Saranac Lake, Franklin County) was originally designed as a camp for New York City businessman Moritz Walter. Of the two existing primary historic buildings, one contained the dining room, kitchen, and billiard room and the other the living room and bedrooms. An outstanding architectural feature was the large stone fireplace chimney mass, entwined with the staircase ascending from the dining room floor to the billiard room above. The property was owned by Nancy and Norman Howard for a number of years and they operated the complex as the Wawbeek on Upper Saranac Lake. The original dining building was a fine dining restaurant opened to resort guests and the general public. The original living room and bedroom building was used to accommodate guests of the resort. In 2007 The Wawbeek was sold to a couple from California who subsequently demolished it in order to build a new “Great Camp.”

Garondah Lodge (Elizabethtown, Essex County) was built in 1881 by Thomas B. Coddington, a New York City iron master. Subsequent owners included: John Stevens (1887); Lewis Hyde (1903); Erman Ridgeway (1909); Frank Munsey (1917), publisher and one of the owners of the New York Herald; Sol H. Goldberg; and Dan Somers (1960s). Somers operated a country club and restaurant for several years until it closed. It slowly began to fall into disrepair and eventually was demolished.

Dexter Lake Camp (Santa Clara, Franklin County) was built in 1890 by Orrando P. Dexter, son of the founder of the American News Company, as a replica of Albrecht Durer’s home in Nuremburg, Germany. It was a fourstory mansion sited on a 3,000acre forested property. In 1994 the Dexter house was in pristine condition, having been recently restored by the firm of Crawford and Stearns for the previous owners, when it was purchased and demolished by singer Shania Twain and her husband, Robert “Mutt” Lange, who built a huge, modern house and recording studio on the property. A few years after the new building was constructed, Twain put it on the market.

Harriman Cottage (Paul Smiths, Franklin County), was only one of three remaining Paul Smiths Hotel era cottages not yet restored by the College. It remained unoccupied and in deteriorating condition. Despite efforts to secure substantial funding for its restoration, Harriman Cottage was demolished to make way for a new structure that will become the home of the Adirondack Watershed Institute.

The 1929 Lake Champlain Bridge (Crown Point, Essex County), was the most significant work of bridge engineering in the AdirondackLake Champlain region. It was listed on the National Register of Historic Places and was being considered as a National Historic Landmark. Because of deterioration and structural concerns, the New York State Department of Transportation and the Vermont Agency of Transportation studied various options for either rehabilitating or replacing the bridge. AARCH actively advocated for its preservation and rehabilitation. We argued that this option would not only save an important regional landmark but early indications were that it would be the least costly, result in minimal disruption in traffic during reconstruction, could be brought to completion the quickest of any alternative, and is consistent with New York State’s policies regarding the preservation of its engineering legacy. Despite the efforts of AARCH and others, the Lake Champlain Bridge was demolished in December, 2009. 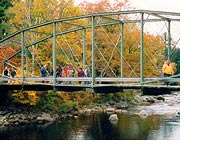 The Walton Bridge, 1885 (Keene) was one of only about 40 lenticular or parabolic truss bridges remaining in the United States. It was destroyed in 2011 during Tropical Storm Irene. 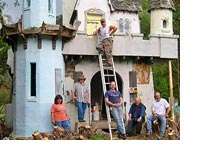 Photo: Volunteers work on stabilizing the Castle at the Land of Make Believe in 2006

This fantasy park (Town of Jay), which opened in 1954, was the finest work of the prolific theme park and toy designer Arto Monoco.

Devastated by floods and ice jams and finally closed in 1979, there were still a dozen buildings remaining till Tropical Storm Irene destroyed them in 2011.