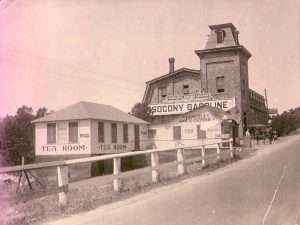 “It is in the nature of the automobile that the city spreads out thus and far away,” said Frank Lloyd Wright. The automobile offered a tantalizing liberation for Americans in the early twentieth century—freedom to go wherever, whenever,  with a speed never thought possible. We take it for granted today, but remember the feeling when you first rode a bike or first learned to drive? Multiply that by 58 million — that’s how many cars were sold in the US in the 1950s. With the freedom to move faster and easier, downtown housing declined and cities began to stretch and spread out. Cars led the way and buildings followed close behind, and the suburbs of mid-century America, with their housing developments and shopping malls, sprang up.

With a car in the driveway of nearly every middle-class family, the pressure to connect that driveway to distance places resulted in the Federal Highway Act of 1956 and opened the era of interstate construction, and then the touring vacation by car. Americans took to the roads to see the country and some made their way up to the Adirondacks. Gas stations, motels, restaurants, and theme parks designed to attract, accommodate, and entertain, popped up along the state and county roads of the Adirondacks, and when I-87 was finished in 1967, clustered at highway exits. 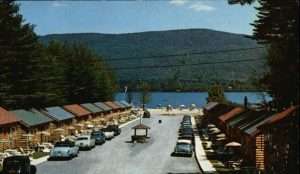 Fast forward 50 years to the summer of 2016. Just like the tourists of mid-century America, AARCH is taking to the roads this  season to help you experience the Adirondacks through the places, roads and people that make the region so special. (You can find all of our tour information by clicking here.)

The automobile altered the Adirondack landscape, starting with its roads. The Good Roads Movement began in the 1890s with farmers and bicyclists as the leading advocates for improving roads outside  of the cities, and in the 1900s auto enthusiasts joined the crusade. State routes such as Route 3, which cuts east-west across the Adirondacks, were rapidly constructed  in the 1920s, as cars became more affordable for middle-class Americans. In 1935 Whiteface Veterans Memorial Highway opened, snaking up the mountain and allowing cars to reach the top of a High Peak for the first time. The Northway, I-87, was built in stages from 1957 to 1967.  In this period of post-war prosperity, vacationing families traveling by car could traverse new roads all over the Adirondacks, spurring the development of a new type of architecture. Buildings were designed as roadside attractions to visually draw a tourist in, placed conveniently just off the highway or along a road on the edge of town. This began the era of the “themed park,” perhaps the beginning of what is referred to today as “experiential tourism.” 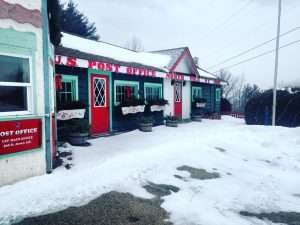 It was December 1946, the first Christmas after World War II, while driving past festive Adirondack villages that Julian Reiss was struck with a vision to create a place for children to visit Santa Claus. To design what would be billed as the first amusement park in the country, he enlisted the talents of Au Sable Forks native Arto Monaco. Santa’s Workshop opened in 1949 in Wilmington, conveniently located at the bottom of the Whiteface Memorial Highway and attracted tens of thousands of visitors from its first year on.  AARCH will host a special tour to Santa’s Workshop on Wednesday, June 29 with Julian’s son, Bob Reiss, as our guide. Click here for more information. 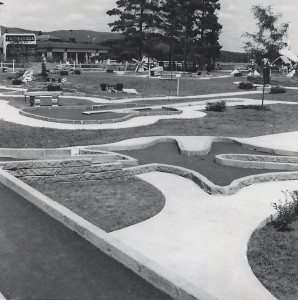 Right off of I-87, Lake George, which had attracted wealthy families to its shores from the 1880s, exploded in popularity as a mid-century destination for the middle-class. Places such as the 1940s Scotty’s Lakeside Resort, provided tourists with affordable private cabins and a parking spot, right on the water. Around the World Miniature Golf, which opened in 1963, drew customers in with bright, fun architecture (including a larger-than-life statue of Paul Bunyan) and its convenient location in the heart of the village. The Lake George Howard Johnson’s was an anchor and a reliable landmark of the American landscape, and its innovative “place-product-packaging,” iconic “Ho-Jo’s” sign and building shape drew customers in. Families knew exactly what they were going to get at a Howard Johnson’s, wherever it was. Our “Roadside Architecture of Lake George” tour will be visiting many of its attractions on Monday, June 20.  Click here for more information. 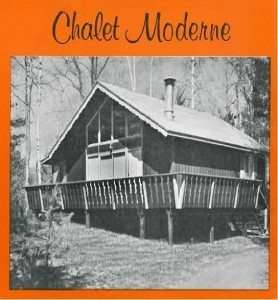 A model chalet from the Ausable Acres brochure. Courtesy of BA Straight Realty.

During the post-World War II boom, middle-class Americans began to dream of a second home, which was both appealing and attainable. Chad Randl, author of A-frame, writes, “it was the era of ‘second everything,’ when postwar prosperity made second televisions, second bathrooms, and second cars expected accoutrements of the middle-class American life.  The Acres, a planned recreational community, the brainchild of lumber mill-owner John Eaton, epitomizes this mid-century, middle-class dream: a place where average Americans could own a “leisure home,” be it for, as an early 1960s Acres’ brochure stated, “vacation, retirement, or as an investment.” Today, Ausable Acres still strongly presents its original design and community concept. From Swiss chalets, to rustic log cabins, to petite a-frames, and shed-style contemporary homes, its architecture helps tells the story of the people who live, recreate, and call the Acres their home or home-away-from-home. AARCH takes you on a tour of Ausable Acres on Saturday, August 27. Click here for more information.

The places of the Adirondack region, be it a Great Camp or a pre-fab home, ordinary and extraordinary, stand as important visual reminders of our shared past. Join us this season as we, often in mid-century style, take to the roads for touring adventures in architecture in the Adirondacks and beyond.