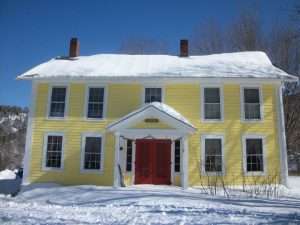 Our Upper Jay farmhouse has a sign on it saying it was built in 1832.  No one living knows for sure if that’s true.  I spent some hours in the Essex County, NY Clerk’s office looking up ownership records, and got back pretty far, but not to 1832.  So the handmade plaque hangs there on the front porch portico, daring anyone to prove it wrong.

We bought the place in 2003 when the ADK home prices were booming, bringing the property’s ownership out of the Torrance family which had held it for generations.  We were part of the post-9/11 exodus from New York City.  We had enough money to buy a house and land, but not enough to renovate it, which some people thought we ought to do.  We were young, middle class, first-time house-buyers.  I had fallen in love with the place from its real estate photographs — a white clapboard colonial with a central entryway, two symmetrical floors, two chimneys, sweeping riverfront acreage, large and warm and welcoming on the East Branch of the Ausable River. My Spouse was a bit more cautious, but eventually he, too, succumbed to the charms of house and land, and we bought it in the spring.

It was the oldest house by far along that stretch of the river, on a slight knoll, a bump alongside the river decorated with stately maples.  Neighbors teasingly reassured us that our house had never flooded and all their rowboats were pointed in our direction if any flooding–whether due to rain or ice jam–got bad.

That summer I fell even more deeply in love with the property.  There were sapling trunks in the breezy attic, holding up the roof in place of two-by-fours.  There were towering, ancient lilacs in four colors flanking and buttressing the house and barn foundations.  The central support beams in the basement had ax-marks.  There were remnants of an antique phone system that served the old barns back in the day, a chain for hoisting carcasses or engine blocks in the back garage.  The maple trees were enormous, sheltering and many-branching.  There was a canning closet, a gun rack in the kitchen; there were pantries and hidden nooks.  The floor-plan was perfect for entertaining and for having kids.  Sweet plum trees had sprouted in one of the barn foundations.  The 1940s-era bathrooms even had their charm.   I planned to plant rhubarb, asparagus, horseradish and annual crops in the fertile, stoneless riverside soil.   My husband began buying hand tools and machines that would have had no meaning when we lived in a loft in Brooklyn.  We called AARCH for advice. 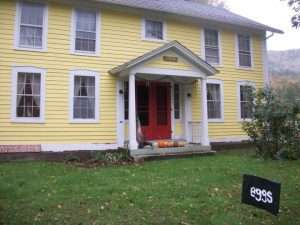 One autumn night we were blessed by a rippling pink chrysanthemum of northern lights looming above our house, inconceivably silent, beautifully mysterious and outrageously powerful.  Like I thought of our home.

In our near-decade of residence there we painted the house from white to sunny yellow, braving the skeptical frowns of locals who said it had always been white.  We made friends, both of the native and imported kind.  After we installed a woodstove (which doubtless replaced one that had been taken out generations ago when oil heat was the newest thing,) we accepted blizzards and snow storms with open arms.  Spouse joined the local Volunteer Fire Department; I joined the library board and helped start the hamlet’s first art center.  We bought a tandem truckload of Adirondack hardwood logs, and my Spouse and a bunch of local friends got out their chainsaws (some newer than others,) bucked and split the wood, giving us enough firewood for several years.  We bought one truck, and then another.  We cheered Ironman athletes who cycled by us twice in one day, once each July.  We rebuilt one of the barns and spent a few wildly idealistic, adventuresome and difficult years raising hogs and chickens for market.  We started a family, and indeed the openness of the house was perfect for a speedy little boy on a mission to learn to walk, learn to run, and master his tricycle.  Nothing major went wrong.

Until late August, 2011, the summer storm called “Irene”, when it rained.  And rained and rained.  The river rose so fast I could watch its ominous progress, inches closer as I breathed.  As we had been told to in times of flood, we expected neighbors to come to us for a safe dry place, but then the wild river crossed the road right there and edged toward our stone foundation.  So the neighbors rescued us, fleeing comically across the flooded fields in their much bigger truck, up into the surrounding hills where more prudent and less idealistic homeowners lived. The next morning we walked down the hillside and surveyed our house, and saw that it and our trees still stood, proud and beautiful.  But the basement had flooded. 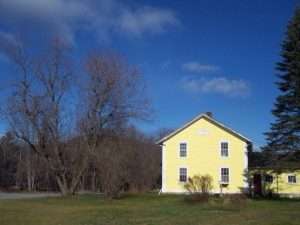 Our rosy-hued love affair with the homestead was over. Everything in the basement was a loss, including critically-important appliances and a year’s worth of homegrown meat and produce I had “put up” for winter.  I still feel wistful about that abundance of hams, bacon sides and roasting shoulders from hogs I birthed, raised and cared for, those fresh local vegetables and fruits.  Our furnace was the most urgent loss.  The ADK Foundation sent us a check, unasked, and so we bought a new and better furnace.  Community, FEMA and family rescued us in other ways.  The blanket of silt dried and blew into a choking dust.  We thanked God for our blessings as some of our neighbors looked dazedly at the shattered hulks of their houses and businesses, mud-soaked and ruined.  The community ate and partied and wept together, losses and shocks unimaginable.  Thank goodness no humans died.  We tried and failed to sell to sell the Yellow House.  We learned about the metaphorical meaning of the term “under water.”

After the 500-year flood called Irene, my Spouse was given an opportunity to live in nearby Lake Placid, so we moved there and rented our beautiful old farmhouse to another family.  Horses replaced the pigs in the pastures.  Spouse says never…I say maybe we will move back someday.  The house still claims to have been built in 1832.  I believe it now, after going through that flood.  The folks of old knew how to situate a farmhouse in relation to the river.

Martha Pritchard Spear is an AARCH board member and lives in Lake Placid with her family. 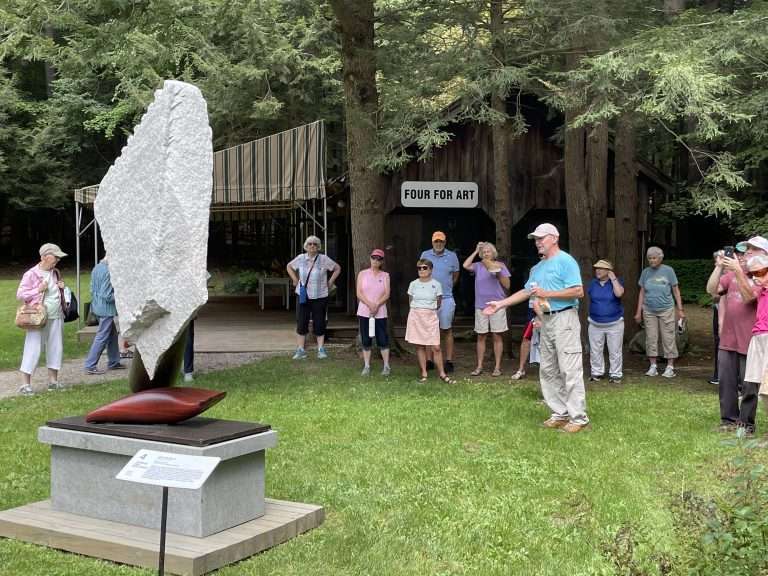 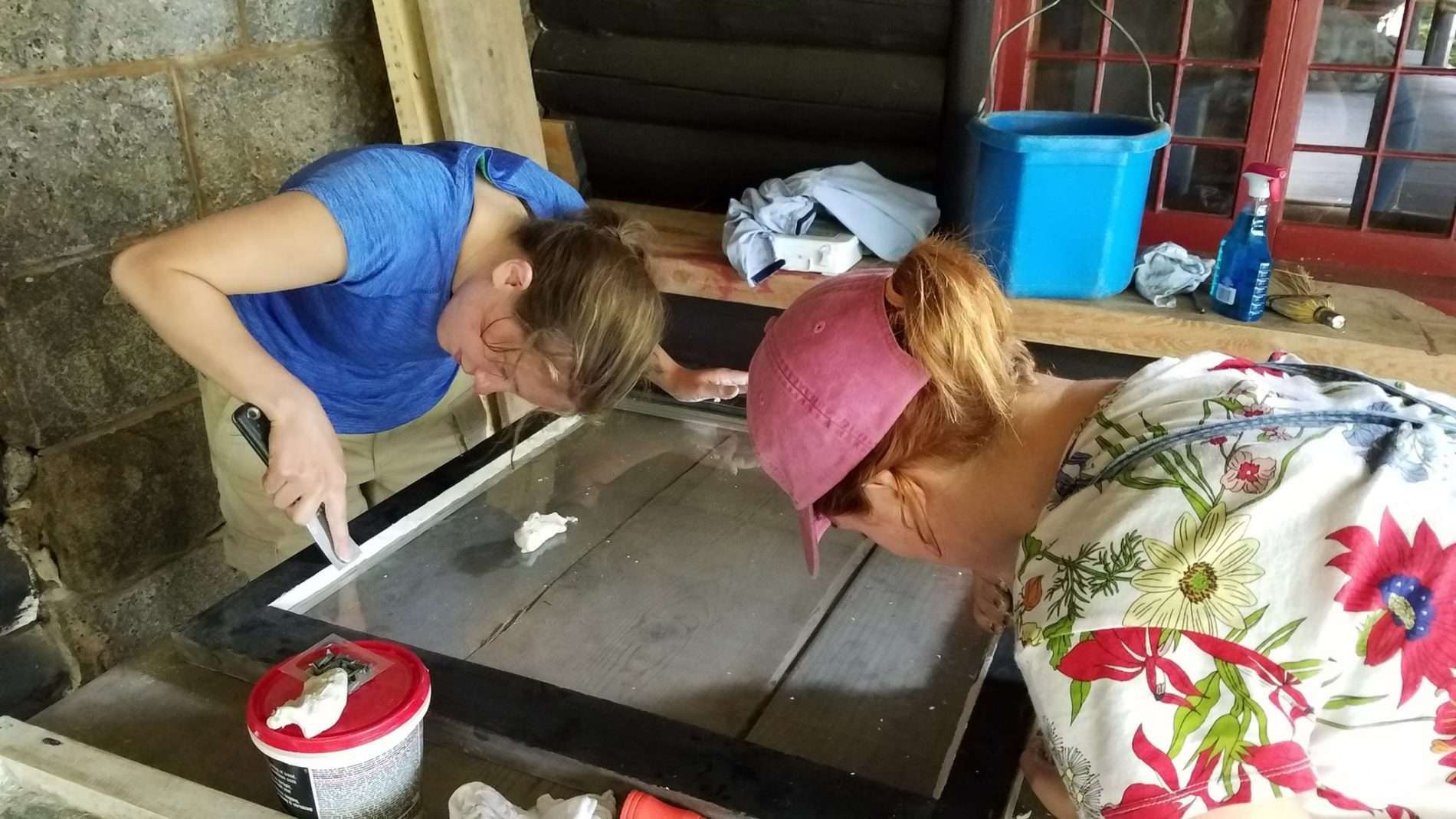 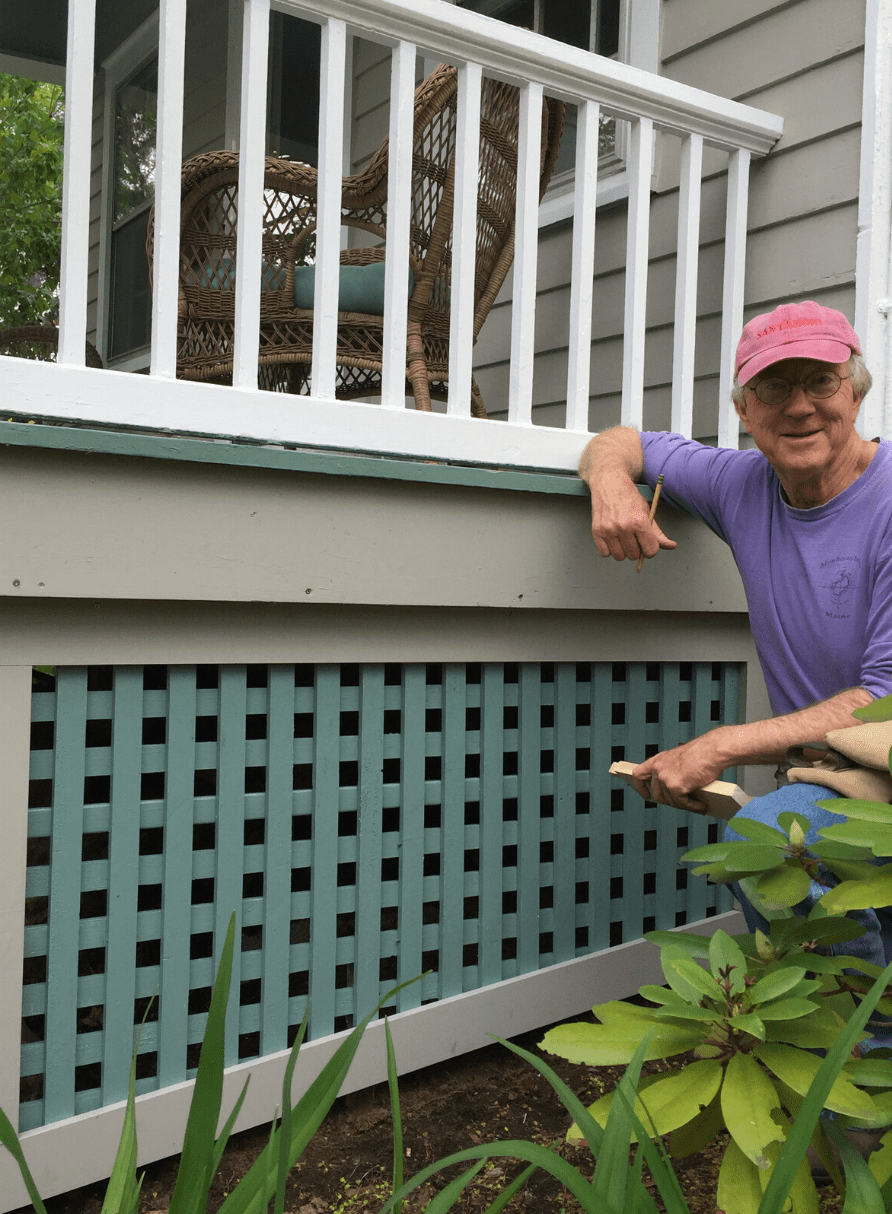 By Steven Engelhart Greetings everyone, Oscar the Grotesque here, joining you for another week to look more closely at Adirondack architecture, historic buildings, and preservation opportunities. This is a great time of year to be doing exterior house projects. We…

Looking for some winter fun? Join AARCH for one of the 2016 Winter Weekends at Great Camp Santanoni. These popular events are set for January 16-18 (Martin Luther King Day weekend), February 13-15 (President’s Day weekend), and March 12-13. The 10-mile round trip to the… 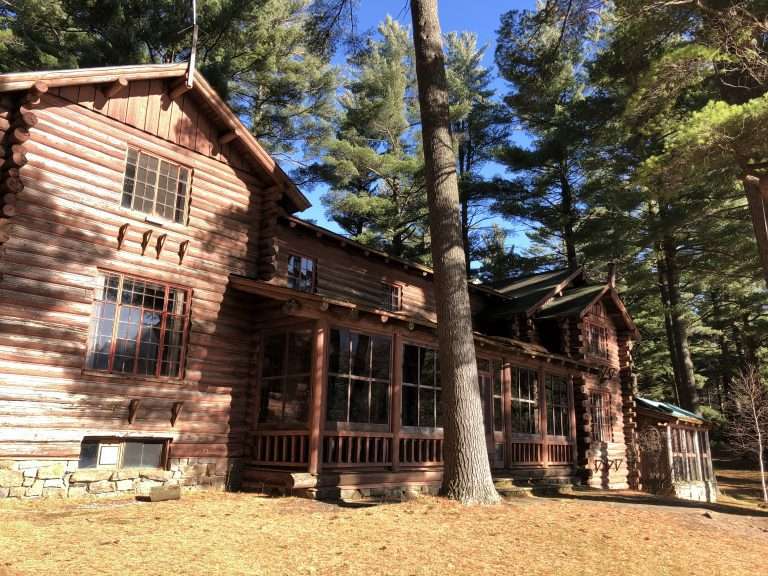 Adirondack Architectural Heritage (AARCH) enthusiastically supports Assembly Bill 7535A (Jones) and Senate Bill 7868 (Stec), which amends Article 14 of the New York State Constitution to convey land to Debar Pond Institute in order to facilitate the preservation of the… 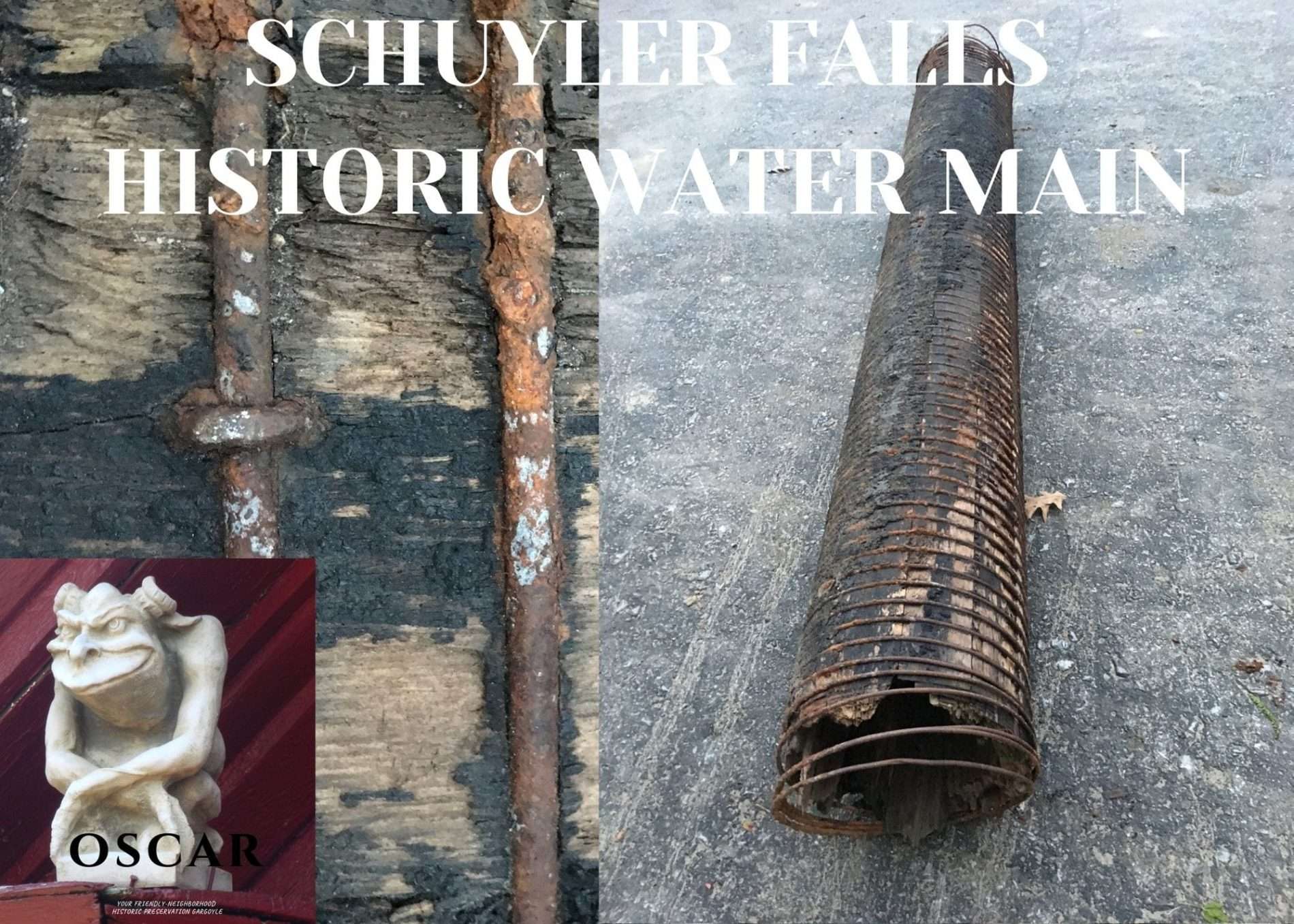