Home / The AARCHer / We Became Preservationists 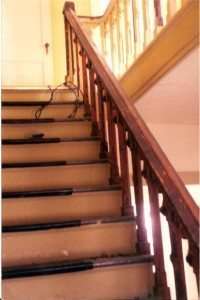 By the time my parents bought their dream house in 1990, it was already a century old.  I was heading into the 7th grade when we packed up our belongings and two cats, two dogs, two parents, and seven kids (we’re a family of ten, but my three oldest siblings were already out on their own) and headed down “Sweden”, officially known as Standish Road or the main street that runs through the hamlet of Lyon Mountain.

We made the transition from a neat, but cramped, single-wide trailer to a historic 3-story home with plenty of room (and rooms!) to grow and explore.  Our new-to-us old home belonged to Dr. H.R. Marvin – one of Lyon Mountain’s “company” doctors.  Doc Marvin, as he was known to the locals, began practicing medicine in Lyon Mountain in the first decade of the twentieth century for the Chateaugay Iron and Ore Company, and later for Republic Steel. One of Lyon Mountain’s “Old Timers” told my parents that Doc Marvin’s house had been disassembled from a settlement on Bradley Pond in the Town of Ellenburg, and brought to its lot in Lyon Mountain on the railroad.  This isn’t far-fetched, as some recorded history I’ve read mentions this exact practice.  Plus, the rails ran right through what is now my parents’ side lot.

In the 1940s, when my father was a child, he remembers being alleviated of a nagging toothache in what is now the living room of their home.  Doc Marvin sat him a chair, climbed onto my father’s lap, placed his knee in my dad’s chest to render him immobile, and yanked out the trouble-making tooth with a steady, unceremonious, and forceful grip.  And so it was, in those days.  No fuss, no muss, no tooth. 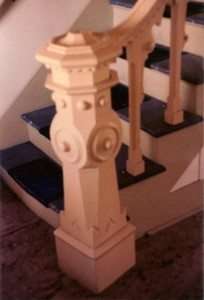 My memories of that house are, thankfully, much more gentle.  I remember envisioning it as a mansion – the biggest house I had ever seen!   The massive front staircase with its intricate woodwork and gentle incline took second-fiddle to the slightly hidden and dark back stairs which connect the kitchen to upstairs bedrooms and a floor-to-ceiling bookcase (a dream for this future librarian!).   The romantic in me imagined who might use those unembellished and unpretentious back stairs (servants, perhaps?).  I had scarcely been in a house with one staircase, let alone two!

It was in this house that my lifelong love affair with all things old was sparked, and it was also in this house where we all became preservationists.

The main staircase, with its wonderfully detailed woodwork and bold, knobby newel was layered in a century of poor paint choices.  When Doc Marvin or his wife would require a freshening up of their living quarters, the company would send a team to put a fresh coat of paint of everything.  Every.  Thing. 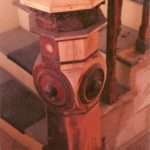 No one in the Siskavich household – big or little, young or old – was exempted from learning how to use a heat gun and steel wool.  Somehow, like magic, all those years of paint came peeling off, only to reveal magnificent, unblemished wood.  Every surface in that old house got a new start – a fresh beginning – just like my family did.

That’s not to say, of course, that we did everything right.  Old windows came out and vinyl siding went on.  The general thought was that these changes were absolutely essential to make an old home energy efficient.  Luckily, we now know that old windows can be just as energy efficient as new ones (Viva la windows!).  My parents probably could have made repairs to their old windows with the right guidance, but as new old homeowners, they made the best choices they could with the resources they had available at the time.

After nearly 25 years, my parents’ home has seen some transition.  The upstairs, once abuzz with a handful of raucous kids, is empty and has been closed off to help with rising heating costs.  My aging parents now occupy a bedroom downstairs and are glad to not have to maneuver up the 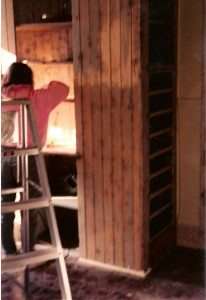 stairs.  The old cast iron kitchen sink has been replaced with a double-basin stainless model, but the beautiful floor-to-ceiling built-in kitchen cupboards, still serve as a reminder of the blood, sweat and tears that went into making our house a home.

As with all things in life, each and every project is an opportunity for learning and growth.  My parents have improved and maintained their historic home, which hasn’t been an easy undertaking by any means.  Aging parents plus an aging house equals struggle.  But, while they’ve made a few preservation mistakes along the way, there is really no reason that house shouldn’t stand for a century more.  I have an enormous sense of pride for what my family has accomplished in that home.  She’s a beautiful old piece of history and I’m proud to say that we’ve had a hand in seeing her into another century.

Virginia Siskavich-Bosley is the AARCH office manager and occasional librarian in our Clayton Family Resource Center.  When she’s not answering phones and fielding research requests, you can find her sampling microbrews and bird-watching – sometimes even at the same time.