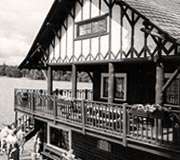 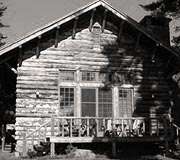 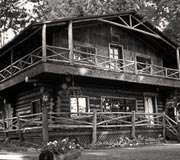 Occasionally, we offer a “Rustic Study Tour” where we view private and public camps of the Adirondacks, led by experts in the field of architectural history and historic preservation. Evenings include lectures, free time, and Adirondack Trivia! The Adirondack Rustic Architecture Study Tour is geared towards two different types of groups: the general public and specific groups. We currently do not have a tour scheduled, but please contact us if you are interested in scheduling this program in the future.

Below is a sample of some of the places we have visited including a brief slideshow on previous Adirondack Rustic Architecture Study Tours:

Adirondack Museum, Blue Mountain Lake: This first-class institution features collections, historic artifacts, and archival material that document the region’s past. Twenty-two exhibit spaces and galleries tell the stories of the men and women who have lived, worked and played in the largest wilderness area east of the Mississippi River.

Hemlock Ledge, Tupper Lake: A privately owned camp, Hemlock Ledge is one of the most remarkable, intact, and little known camp complexes in the region. It was designed in 1907 by New York architect Julian Clarence Levi and includes several buildings, including rustic Birch Cottage, and some notable interiors. Evening lecture by local historian and Coulter expert, Mary Hotaling on The Rustic Camps of William L. Coulter.

Raquette Lake and the Architecture of William West Durant: Travel by boat to Camp Pine Knot on Raquette Lake. This great camp was designed by William West Durant, and once owned by Collis P. Huntington, one of the leading railroad entrepreneurs of the nineteenth century. You will have a guided tour of this National Historic Landmark owned by the State University of New York College at Cortland, and operated as the Center for Environmental and Outdoor Education since 1949. We will then visit Great Camp Sagamore, once the summer residence of the Vanderbilt family. This National Historic Landmark is comprised of twenty-seven buildings, including an outdoor bowling alley. The day will end with a tour of Camp Uncas, a truly remarkable Great Camp and recently listed (2008) National Historic Landmark. Camp Uncas, once the summer residence of J. Pierpont Morgan, is a privately owned camp graciously opened to us exclusively for this tour.

White Pine Camp, Paul Smiths: Like many other large camps, White Pine is comprised of a flock of buildings, more or less divided by function, but the design of these buildings makes the complex unique among examples in the Adirondacks. Situated on the eastern end of Osgood Pond, the thirty-five acre tract was part of the large holdings assembled by Paul Smith on speculation. The purchaser in this instance was Archibald White, an enterprising businessman living in New York. White had been sufficiently successful in salt manufacturing to have retired at the age of thirty-two. After spending two years abroad pursuing interests in art and music, he acquired gas companies in Cincinnati and Cleveland. Subsequently he founded the New York based White and Company, which became a nationally prominent dealer in railroad and other bonds. In 1905, he married Olive Moore, who was born to privilege, but pursuing a career in comic opera. That White was not inhibited by convention is readily apparent in the design of his camp. In 1926, the compound was lent to Calvin Coolidge and his family for use as a summer “White House.”

Camp Winnetaska, Upper St. Regis Lake: Mr. And Mrs. Augustus W. Durkee of New York City purchased the original fourteen acre property in 1886 and began building in 1887. At this time, the property was only accessible by water. The first guests to arrive by automobile are recorded in 1917. The dining room, kitchen and little living room were first constructed, and tents were used for the bedrooms for the first several years. The Durkees occupied the camp for the next fifty-four years. The property changed hands over the next several years, and an additional four acres was added to the original Durkee camp. In 1980 the property was divided, and the guest cabin was moved back from the waterfront and made a separate camp. “Spruce Knot,” the original name of the old camp was transferred to the new, smaller camp.

Camp Santanoni, Newcomb: Camp Santanoni was built beginning in 1892 by Robert and Anna Pruyn and eventually consisted of more than four dozen buildings on 12,900 acres including a working farm, Gatelodge complex, and a huge rustic Main Lodge and other camp buildings situated on Newcomb Lake. Santanoni was in private ownership until 1972 and over the last several decades, in state ownership, it has gradually been restored by a partnership between NYSDEC, AARCH, and the Town of Newcomb. Santanoni is listed on the National Register of Historic Places and is a National Historic Landmark.

Testimonials from past Rustic Study tours:

“Great/Excellent tour …was very interesting and informative …overall great experience.”
“Thank you all for a splendid extended weekend touring the architectural sites from the Great Camp era.”
“Thank you so much for a great tour! The tour surpassed my expectations.”
“I really appreciate the ability to view so many wonderful homes and buildings. The owners and/or caretakers were uniformly very friendly, engaging, knowledgeable and very pleased and proud to show off their places. Congratulations to AARCH for fostering these relationships and for all their good work in the Adirondacks. The AARCH team is excellent!” ~Member, Friends of the Gamble House, Rustic Architecture Study Tour, September 12-17, 2009