To learn more about AARCH’s activities and accomplishments, read the Year In Review. This annual document details the action and involvement on preservation projects, education, and stewardship activities across the Adirondack region. 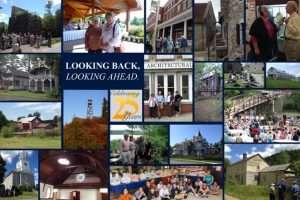 AARCH has been recognized for its outstanding preservation work throughout the Adirondack region with these awards:

2015 – New York State Historic Preservation Award  for long-term collaborative efforts to restore and interpret Camp Santanoni, shared with the NYS Department of Environmental Conservation (DEC) and the Town of Newcomb.

2015 – National Trust for Historic Preservation Trustees’ Award for Organizational Excellence awarded annually to one nonprofit organization in the US that has “demonstrated sustained and superlative achievement in historic preservation.” AARCH received the award at the Partners Luncheon in Washington, DC on November 5.