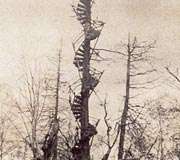 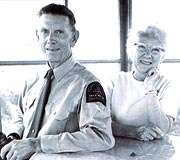 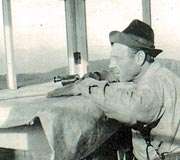 In the late 19th and early 20th centuries, a multitude of large, dangerous and expensive forest fires caused the State to dedicate new manpower and develop new technologies toward the reporting of forest fires throughout the Forest Preserve. The “Great Fires” of 1903 and 1908, which consumed nearly 1 million acres of forest, led to the creation of fire districts with fire superintendents, fire patrolmen and a systematic approach to address citizens’ concerns about forest fire management in the Adirondacks. In 1909, the first Adirondack fire tower, made of logs, was erected on Mount Morris near Big Tupper Lake and many others were built over the next several years.

Beginning in 1916, these log structures were gradually replaced with steel towers, made with interchangeable parts. With the towers came a full-time protection force of Forest Rangers and Fire Observers. The first observation station was established on Poke-O-Moonshine in 1912 and was replaced in 1917 with a standardized steel tower.

Practically all of the labor to erect the fire towers was performed by members of the Forest Ranger force, under the supervision of Forest Ranger Albert Tebeau of Owls Head, who traveled across the state directing local rangers. The cost of a steel fire tower, not including ranger labor, averaged about $530. The cost of restoration is estimated at ten times that amount. Beginning in 1918, circular map tables were properly oriented and fastened to the floor of the cab of each fire tower. On each map table was attached an alidade-type sighting device called an “Osborne Fire Finder” which enabled the Fire Observer to more accurately pinpoint fires. Later, fires in remote areas would be located by triangulation using string maps and azimuth bearings provided by these sighting devices. In addition to detecting fires and providing communications for fire fighting, the Fire Observers also offered information and conservation education to hikers, though this was not part of their official duties.

At one time or another, there have been fire towers at 120 locations in New York State and 57 of those were within today’s Adirondack Park. For sixty years in the Adirondacks, this system was a success. But with the advent of the light airplane for fire sighting and the rising costs of manning the fire towers, these once important stations were slowly deactivated and today none are manned. When the Poke-O-Moonshine fire tower in Essex County was deactivated in 1988, DEC’s costs had risen to $7500 to keep a tower in service during the six month fire season.

Today 34 towers survive in the region (Map) and many have been restored and are accessible to the public. These include: Blue, Goodnow, Poke-O-Moonshine, Hadley, Kane, and Snowy Mountains and Mt. Arab. Other efforts are in progress. Unfortunately, those towers not restored to a safe condition will be eventually disassembled and removed by DEC, forever closing an important chapter of Adirondack history.